What else is coming to Disney+? These are new best Disney+ movies and new shows on Disney+ in March 2021.

Disney+ has released the full list of every television series and blockbuster movie arriving on the streaming service in March 2021. This includes the highly-anticipated finale of Disney+ and Marvel Studios’ first MCU series WandaVision as well as the series debuts of Assembled: The Making of WandaVision and The Falcon and the Winter Soldier.

Some of the programming fans can look forward to streaming on Disney+ in March includes the premieres of The Falcon and the Winter Soldier, The Mighty Ducks: Game Changers and Marvel Studios Assembled, the Premiere Access debut of Raya and the Last Dragon, new episodes of Marvel Studios: Legends and the finale of WandaVision.

The full March 2021 release schedule hitting Disney+ in March in U.S, UK and Canada can be found below:

Garfield: A Tail of Two Kitties

Raya and the Last Dragon

Raya and the Last Dragon

Disney's highly anticipated animated feature is premiering exclusively on Disney Plus Premier Access. Raya and the Last Dragon takes place 500 years after the dragons of the fantasy world of Kumandra sacrificed themselves to save humanity from an evil force, yet now that same evil has returned. Star Wars: The Last Jedi's Kelly Marie Tran voices Raya, who must find the legendary last dragon (voiced by Awkwafina) and save the world.

“Raya and the Last Dragon” takes us on an exciting, epic journey to the fantasy world of Kumandra, where humans and dragons lived together long ago in harmony. But when an evil force threatened the land, the dragons sacrificed themselves to save humanity. Now, 500 years later, that same evil has returned and it’s up to a lone warrior, Raya, to track down the legendary last dragon to restore the fractured land and its divided people. However, along her journey, she’ll learn that it’ll take more than a dragon to save the world—it’s going to take trust and teamwork as well.

Don Hall and Carlos López Estrada are directing, with Paul Briggs and John Ripa co-directing. Osnat Shurer and Peter Del Vecho are the producers, and Qui Nguyen and Adele Lim are the writers on the project.

Walt Disney Animation Studios’ “Raya and the Last Dragon’' will be available on Disney+ with Premier Access in most Disney+ markets, at the same time as it is released in select theaters on March 5, 2021.

“WandaVision” is a blend of classic television and the Marvel Cinematic Universe in which Wanda Maximoff (Elizabeth Olsen) and Vision (Paul Bettany)—two super-powered beings living idealized suburban lives—begin to suspect that everything is not as it seems. The new series is directed by Matt Shakman; Jac Schaeffer is head writer.

Disney Junior Doc McStuffins: The Doc Is In

Directed by Tim Burton, the movie's star-studded cast includes Eva Green, Asa Butterfield, Allison Janney, Judi Dench, and Samuel L. Jackson. Butterfield plays Jake, a boy who discovers a house full of children with supernatural powers run by Miss Peregrine (Green). Soon, he finds his help is needed to protect their home from terrifying enemies. Based on the novel of the same name by Ransom Riggs, Burton brings his signature touch to his adaptation.

From National Geographic Documentary Films and the Emmy Award-Winning Team Behind “Science Fair,” "Own the Room" follows five young star students on their journey to win one of the world’s most prestigious competitions for student entrepreneurs. From disparate corners of the planet, the competitors take their big ideas to Macau, China, host of one of the most prestigious entrepreneurship competitions in the world, the Global Student Entrepreneur Awards. Santosh is from a small farming town in Nepal; Alondra works the register at her family’s bakery in Puerto Rico; Henry is a programming wiz from Nairobi; Jason is a marketing machine from Greece; and Daniela is an immigrant escaping the crisis in Venezuela, taking on the chemical industry from her lab at NYU. They’ve each overcome immense obstacles in pursuit of their dreams, from hurricanes to poverty to civil unrest. Their ideas have already changed their own lives, but are they ready to change the world?

Premiere Assembled: The Making of WandaVision

Join Elizabeth Olsen, Paul Bettany and WandaVision’s creative team as they invite viewers behind-the-scenes of this highly groundbreaking series of documentary style specials. Learn how the production’s surprising concept took shape by drawing inspiration from classic sitcoms. Witness how the crew went to great lengths to emulate various filmmaking methods used during the early years of television. Discover the unique challenges and ultimate rewards of performing an entire episode in front of a live studio audience. Spend time with exciting newcomers to the MCU, such as Teyonah Parris and Kathryn Hahn, along with returning favorites like Kat Dennings and Randall Park. Assembled: The Making of WandaVision is an all-encompassing look at Marvel Studios’ first, and arguably most unusual, streaming series.

“Marvel Studios: Legends” serves as an exciting refresher for the various heroes and villains making their way to the highly anticipated streaming shows premiering on Disney+, setting the stage for the upcoming adventures. The episodes will feature Falcon, Winter Soldier, Zemo, and Sharon Carter.

Disney Secrets of Sulphur Springs: If I Could Turn Back Time

The Falcon and The Winter Soldier

Marvel Studios’ “The Falcon and The Winter Soldier” stars Anthony Mackie as Sam Wilson aka The Falcon, and Sebastian Stan as Bucky Barnes aka The Winter Soldier. The pair, who came together in the final moments of “Avengers: Endgame,” team up on a global adventure that tests their abilities—and their patience. Directed by Kari Skogland with Malcolm Spellman serving as head writer, the series also stars Daniel Brühl as Zemo, Emily VanCamp as Sharon Carter, and Wyatt Russell as John Walker.

Disney Secrets of Sulpher Springs: As Time Goes BY

In present day Minnesota, The Mighty Ducks have evolved from scrappy underdogs to an ultra-competitive youth hockey powerhouse. When 12 year-old Evan Morrow is unceremoniously cut from the Ducks, he and his mom, Alex, set out to build their own team. With a new group of misfit kids and an old rundown rink managed by a familiar face -- Gordon Bombay -- they begin a journey to challenge the cutthroat culture of youth sports today, and rediscover the joy of playing just for the love of the game.

The Falcon and The Winter Soldier

Marvel Studios’ “The Falcon and The Winter Soldier” stars Anthony Mackie as Sam Wilson aka The Falcon, and Sebastian Stan as Bucky Barnes aka The Winter Soldier. The pair, who came together in the final moments of “Avengers: Endgame,” team up on a global adventure that tests their abilities—and their patience. Directed by Kari Skogland with Malcolm Spellman serving as head writer, the series also stars Daniel Brühl as Zemo, Emily VanCamp as Sharon Carter, and Wyatt Russell as John Walker.

111 - Foundations: Recipe for a Movie

How exactly are animated films made using computer graphics? Pixar's creative minds introduce and break down how a movie is made through understandable explanations using metaphors and examples.

From cars to fish to toys to superheroes, Pixar characters have unique personalities, designs, and traits. Join Pixar's character artists and designers as they break down the process of developing a new character from the initial artwork and design, all the way to getting it ready for animation.

113 - Foundations: Through the Lens

Camerawork is just as crucial in animation as it is in live action. Pixar's layout artists explain the craft behind camera and staging, showcasing how camera positioning enhances emotion within a story.

Animation brings characters to life by making them move, feel, think, and talk. Pixar animators take us through the artistry of how they breathe life into characters authentically and explain the importance of acting (and eyebrows) in their craft.

Light and color are essential in conveying the time of day, creating unique worlds, and even evoking emotion. Pixar lighting directors and artists reveal how they illuminate a scene and most importantly, how they utilize light and color for everything from terrifying twists to signature Pixar tearjerker. 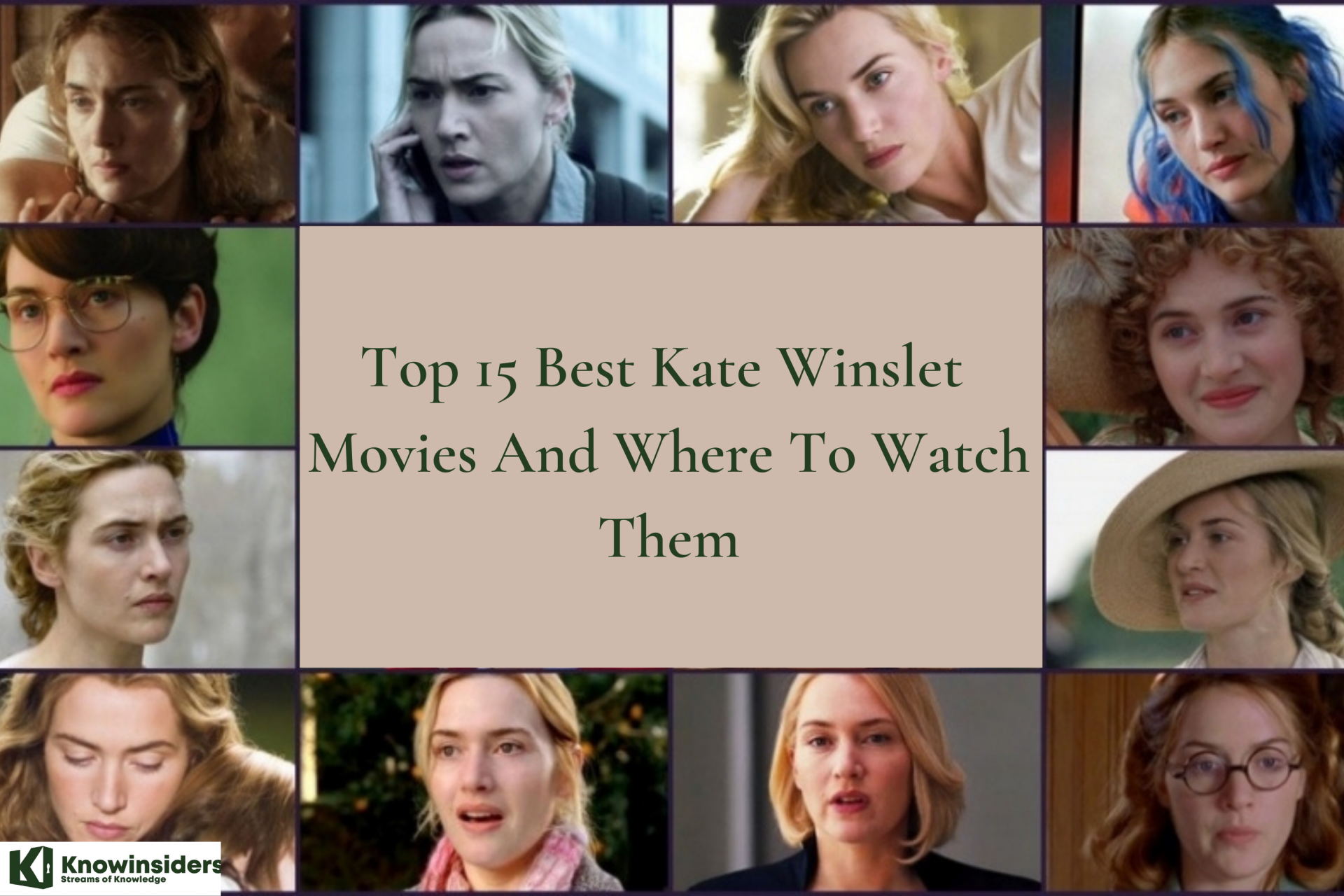 Top 15 Best Kate Winslet Movies And Where To Watch Them

Laelia Yang April 28, 2021 | 14:37
Kate Winslet has had an astonishing career, she starring quite a diverse array of characters from tragedies to comedies. Here are some of her most critically acclaimed films. Kris April 09, 2021 | 20:20
Finding something available on Peacock to watch at the weekend? Check out our suggestions below! When & Where Kris May 09, 2021 | 08:34
Cobra Kai season 4 recently wrapped filming, putting it one step closer to its release date. Check out everything we know so far below!