Pink Supermoon: What is it, When & How to See?

Kris March 22, 2021 | 17:04
Share Tweet Email Share
Our pink supermoon will light up this April. Check out our guide below to make sure you are not gonna miss out on spotting it!

The weather is warming up in many parts of the world, which means people are eager to get outside. If you're looking for an outdoor activity to look forward to this spring, mark your calendar for the super pink moon on April 26, 2021.

What is Pink Super Moon?

A super moon occurs when the moon's full phase coincides with its perigee, or the point in its orbit when it comes closest to Earth. The fully lit disc of the moon combined with its relatively short distance from our planet makes it appear especially large and bright in the night sky, Mental Floss cites.

Though the full moon will look extra spectacular in April, don't expect its color to be any different. The name pink moon describes the first (and typically only) full moon in April, and it has nothing to do with the moon's hue. According to The Old Farmer's Almanac, the name comes from a North American wildflower species called moss pink that typically blooms early in the month.

When to see The Pink Super Moon?

Venture outside on the night of Monday, April 26, to catch a glimpse of April’s Full Pink Moon. This full Moon—which is the first of two supermoons this year—will be visible after sunset and reach peak illumination at 11:33 P.M. EDT.

For the best view of this lovely spring Moon, find an open area and watch as the Moon rises just above the horizon, at which point it will appear its biggest and take on a golden hue!

SUPER PINK MOON: THE FIRST SUPERMOON OF THE YEAR

(Note: Before you get your hopes up, this “Super Pink Moon” won’t actually look “super pink”—or any hue of pink, really. The Moon will be its usual golden color near the horizon and fade to a bright white as it glides overhead!)

Just how big and how bright, exactly? On average, supermoons are about 7% bigger and about 15% brighter than a typical full Moon. However, unless you were to see a regular full Moon and a supermoon side by side in the sky, the difference is very, very difficult to notice!

In April Moon names, references to spring abound! Breaking Ice Moon (Algonquin) and Moon When the Streams Are Again Navigable (Dakota) reference the melting ice and increased mobility of the early spring season, while Budding Moon of Plants and Shrubs (Tlingit) and Moon of the Red Grass Appearing (Oglala) speak to the plant growth that will soon kick into high gear.

Other names refer to the reappearance of certain animals, including Moon When the Ducks Come Back (Lakota), Moon When the Geese Lay Eggs (Dakota), and Frog Moon (Cree). Along the same vein, Sucker Moon (Anishinaabe) notes the time to harvest sucker fish, which return to streams or lake shallows to spawn. According to legend, now is the time when this fish comes back from the spirit world to purify bodies of water and the creatures living in them. (This name may also be applied to the February Moon, to honor the sacrifice of the sucker fish in order to feed the Anishinaabe peoples, traditionally helping them to survive the winter.) 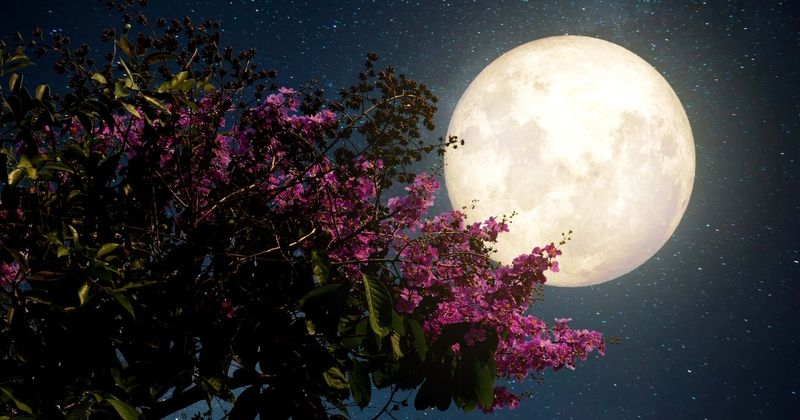